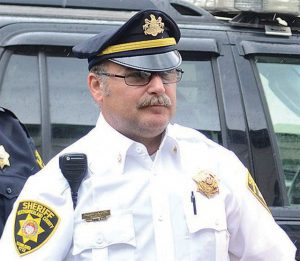 Robert J. Wolfe has been serving as Northumberland County Sheriff since January of 2014. With seven years experience in the Sheriffs office, Wolfe was nominated by Pennsylvania Governor Tom Corbett & approved by a unanimous vote of the State Senate, and was elected to a full four year term in November 2015.

A 1989 graduate of the Allentown Police academy, Wolfe served over 20 years with the City of Shamokin Police Department, holding various titles & capacities including Arson investigator and acting Chief of Police before retiring with the rank of Corporal.

Sheriff Wolfe previously served as the Chief of Police in New Berlin Borough, Union County, and as a patrol officer in Zerbe Township, Pa.

A native of Shamokin, Sheriff Wolfe lives in Coal Township.

– To serve and enforce all orders of the County Court of Common Pleas.
– To provide courthouse policing throughout the courthouse complex.
– To transport prisoners to and from county and state institutions for court appearances.
– To keep the peace and good order in Northumberland county.
– To arrest violators of the law and fugitives.
– To assist other law enforcement agencies in the county as requested or in periods of emergency.
– To serve and enforce protection from abuse orders
– To serve criminal and domestic bench warrants.
– To serve all types of civil process.
– To conduct levies sales of personal property and real estate.
– To issue concealed weapons permits and licenses to sell firearms.
– To perform other duties as required by the Court of Common Pleas.
– To provide security and protection for the Court of Common Pleas and court related functions.
– The Northumberland County Sheriffs office issues permits to Northumberland County residents and out of state residents with a valid carry permit and drivers license from their state of residence.