Home Sequence of a Criminal Case

Sequence of a Criminal Case 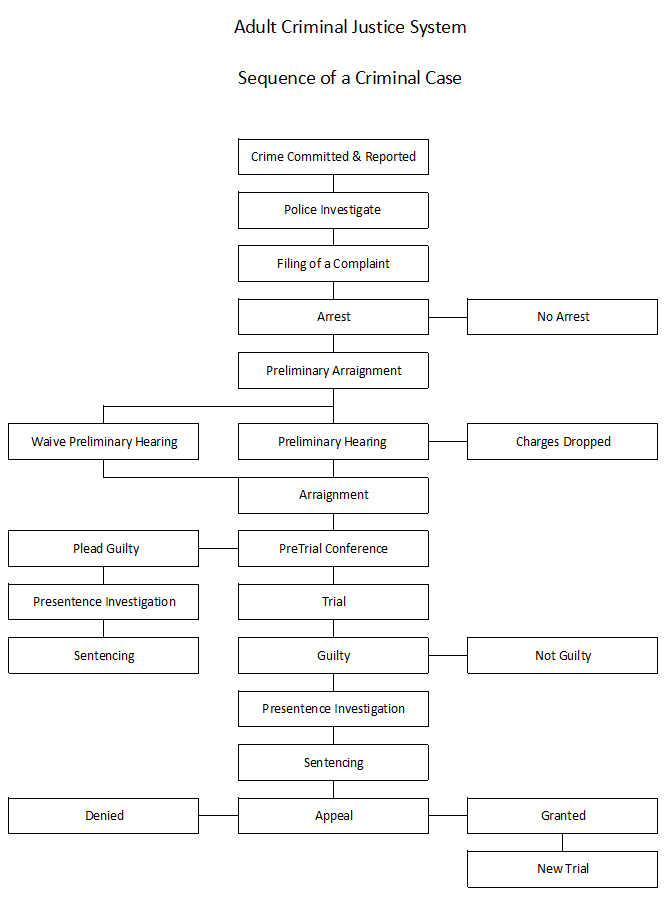 Filing of Criminal Complaint
After an alleged crime is investigated, the police initiate the criminal procedure by filing a complaint with the Magisterial District Judge (MDJ) in the area that the crime occurred. Once the complaint is filed, the MDJ will issue either a summons or a warrant of arrest, depending generally on the seriousness of the offense alleged. If issued a summons, the defendant will be notified of the date of their preliminary hearing in the summons.

Preliminary Hearing
The preliminary hearing is also held before the Magisterial District Judge usually within 3 to 10 days of the arrest and preliminary arraignment. The district attorney’s office will present evidence on the case on behalf of the Commonwealth in order to prove that a crime has been committed and that the defendant is probably the perpetrator of that crime. (Known as a prima facie case) If a prima facie case is presented, the case will be held for court. The defendant will be scheduled at this time for either a guilty plea or a pretrial conference.
The criminal defendant possesses the right to a preliminary hearing. Like most other rights of a criminally accused, this may be waived or given up for some reason. Common reasons could be that the defendant may readily admit his guilt and simply want to get through the system quickly or that a plea negotiation has been reached in advance of the trial. This negotiation may include waiver of all formal proceedings.

Pretrial Conference
The pretrial conference is held with the defendant, his defense counsel, the Assistant District Attorney prosecuting the case and the President Judge. It is at this time that the course of disposition will be determined. All pretrial matters should be resolved at the pretrial conference. The defendant may elect to enter a guilty plea or to proceed to a jury or non-jury trial.

Guilty Plea
The defendant may choose to waive his right to a trial and enter a plea of guilty, admitting his guilty of the crime charged. The defendant will appear before a judge in the Court of Common Pleas who will determine that the defendant is knowingly and voluntarily entering a plea of guilty to the charges against him. An Assistant District Attorney will be present at the guilty plea hearing and represent the Commonwealth. Once the judge accepts the plea, the defendant may be sentenced immediately or a presentence investigation may be ordered.

Pre-sentence Investigation
The Northumberland County Adult Probation and Parole department will conduct an investigation and prepare a report for the sentencing judge that will include a summarization of the crime and the defendant’s personal and criminal backgrounds. Generally the victims of the crime will also be contacted by the probation officer to provide statements for inclusion in the report.

Trial
Defendants not entering guilty pleas may choose to be tried by a jury of twelve citizens or by the judge alone. The Commonwealth is represented by an Assistant District Attorney who must establish the defendant’s guilty beyond a reasonable doubt. The defendant is under no obligation to present evidence or testimony; however, they may do so if they wish. If tried by a jury, the jury must return an unanimous verdict; if tried non jury, the judge must return the verdict. If a defendant is found not guilty, he will be immediately discharged. If found guilty, the defendant may be sentenced immediately or sentencing may be deferred pending a pre-sentence investigation.

Sentencing
Sentencing may occur immediately after the entry of a guilty plea or after the verdict in a trial or it may be deferred with scheduling with 90 days. The defendant may be sentenced to prison, probation, fines, or any combination of these. Restitution is ordered by the Judge at this time as part of the defendant’s sentence. Prison sentences may be served in the Northumberland County Prison or at State Correctional Institutions throughout the state. Under a probation sentence, the defendant will not serve time in prison but will be supervised by the Northumberland County Adult Probation and Parole Department.