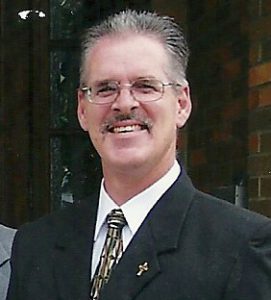 James F. Kelley is the owner of James Kelley Funeral Home, Coal Township, and a licensed Funeral Director since 1985. Prior to being elected coroner in 2001, Kelley served as a Chief Deputy and Deputy Coroner under former coroner Richard H. Ulrich, for 12 years.

As coroner, Kelley is certified by the Commonwealth of Pennsylvania, Office of the Attorney General, in medicolegal death investigations for coroners. By successfully completing his initial course of instruction, and thereafter on an annual basis, Kelley is one of only two county residents certified by the Commonwealth to assume duties as a full-time coroner. Kelley is one of two of the state’s 67 coroners and/or medical examiners to be appointed as a liaison to the Pennsylvania Association of Coroners, Board of Education.

Kelley assisted the North Central Highway Safety Network with its implementation of “Survival 101”, a teaching aid on the importance of seatbelt usage used by Police in local schools. He has given numerous presentations in the County’s High/Middle Schools, Luzerne College and Northwestern Academy on the dangers of drug use and driving while impaired or texting.

Kelley aided in passing Act 122 through which his Office annually receives approximately $7,000.00 from the Commonwealth through revenue generated by death certificate costs. As a cost-saving measure, he initiated protocol to contact Humanity Gifts Registry (HGR) for unclaimed bodies to be used for scientific research. If HGR denies the body, the coroner’s office has the body cremated.

Following the 9/11 terrorist attacks, Kelley volunteered and was called upon to work with the Office of the Chief Medical Examiner of New York City. He also volunteered his services following the recent Sandy Hook tragedy in Connecticut.

His proudest moment was the enactment of “Safe Haven Day” on July 11, 2012. Through the efforts of State Senator John Gordner and Representatives Lynda Culver and Kurt Masser, and Kelley, this date recognizes the Safe Haven Act of 2002, also known as Newborn Protection “Baby Mary” Act, sponsored by former Senator Edward Helfrick. (For more information visit www.secretsafe.org)

His participation in investigations resulted in an excellent working relationship with the District Attorney Office, law enforcement and other agencies. They have achieved a 100% conviction rate in all County homicides investigated since he took office. In addition to the D.A.’s Office and police, this relationship has extended to the dedicated EMT’s, ambulance and fire personnel, hospital doctors, nurses and staff, and Communication Center Dispatchers and personnel.

“With the numerous experiences only I have garnered through the years, I pledge to continue operating the Coroner’s Office with an extremely high degree of moral and ethical standards. My job is to serve the public, protect the citizens of the county, use compassion and knowledge all while understanding the difficulties that arise from the death of a person’s loved-one.”

Kelley is married to the former Patricia A. Czech. They are the parents of three children, James P. II, his wife Kristy and daughters Elyse and Celia, Mary Kate and Kieran J. He is the son of Joan L. (Milbrand) Kelley and the late James P. Kelley, a former County Commissioner, and son-in-law of Patricia A. (Rodman) and the late Walter J. Czech.